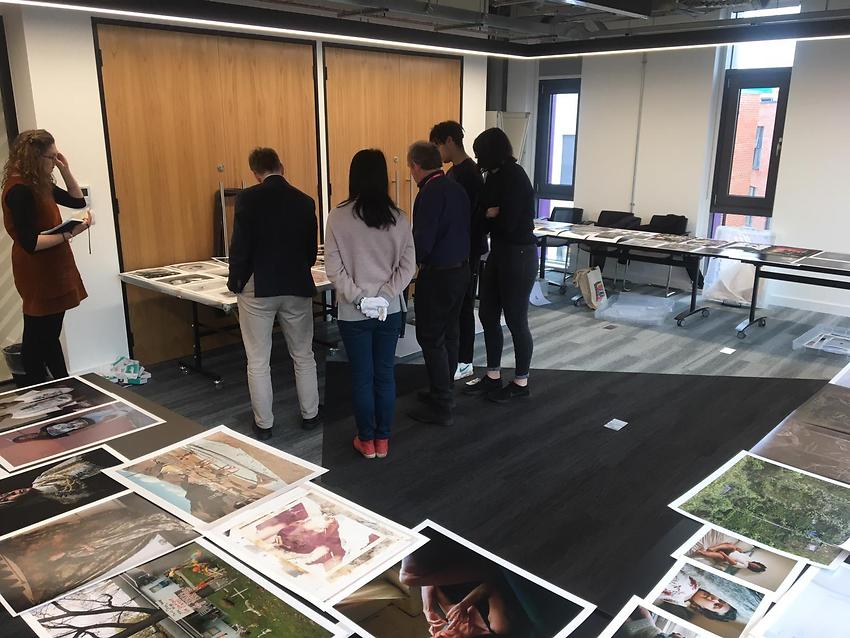 Judging the RPS IPE162 this year has been an enriching experience. To begin with, the five judges provided the basis for a balanced and informed view. Michael is the Director, Education and Public Affairs of RPS with unbeatable experience in historical and contemporary photography in the international context. Originally from Australia, Shannon is the Global Education Director of the legendary Magnum Photos. Skinder is the CEO/Director of New Art Exchange, who sees photography in the wider context of contemporary art. His self-definition is a ‘south Asian Punjabi disapora’. After these three ‘industry leaders, we have two practitioners. Cian is an extremely well-informed and very young editorial/commercial photographer. And finally it’s myself, a committed art photographer with one foot in the academia. Three men, two women; two whites, three non-whites. Each had different emphasis to the judging process but all prepared to support the best and the most promising practices. We had equal votes and were told not to think about what might be good for RPS. Instead, we were only there to champion good photography.

The judging process went surprisingly smoothly. We often had different opinions but we respected each other’s reasoning. At the end of the day, good works tend of be so convincing that there is hardly any disagreement in choosing them. But what is good work? I suppose that works can be good for different reasons. The winning ones need to have it all: images with inherent qualities to ‘lock’ our gaze——they’re surprising, charming, happy, sad, loud, quiet….what ever it is, they make you want to look at them more and think about them before trying to find out more about them. Simply being ‘eye-catching’ is not enough at all. You not only need to catch a gaze, but also need to keep it.

Often the winning ones are satisfying enough even by having interesting pictures and a powerful edit (a group of pictures). But they will go further with a strong statement. Writing statement, of course, is an art on its own term. It can simply be about what you have done, why, and how. The better ones might tell the context of the work: personal, social, political, environmental, and so on. Generally speaking, very strong work tends to have very strong statement, which indicates that good work comes from in-depth research, acute context awareness and a clarity of mind.

What might give the work a slight advantage? Perhaps it’s the social political significance. For example, ageing, immigrant, Brexit, body image, and so on. But they will not help much if the visuals don’t live up the context.

What can drag the work down? I suppose that the main thing is uninteresting pictures——‘uninteresting’ has nothing to do with not having visual drama. Simply, it does not excite the judges emotionally or intellectually. For example, a portrait with a perfect and classic ‘Girl with Pearl Earring’ style. It’s nice, yes. But haven’t we seen it a million times? It’s got to have something more to offer——to reason for and to defend such a ‘conventional’ visual language.

After the visuals, the statement can also drag work down. Typically a work can be a bit less convincing visually. If the statement doesn’t give it extra strength, then it’ll most likely go down. Sometimes the opposite happens. Two works are equally strong on the visual sense. One has a perfect statement, the other one has a statement much stronger than the visual. This indicates that the visual hasn’t been totally worked out yet. So the latter goes down.

Finally it’s the print quality. RPS IPE is one of the very few competitions that insist on receiving physical prints for the final round of judging. This means that the photographers need to have a high standard on their technical and craft abilities. After all, photography is not just what’s on the mobile screen. Any wrong judgement on this side will surely drag the work down. Often the mistakes here are basic: wrong paper, too much sharpening, wrong colour cast, newton rings, colour noise, and so on. To make it through the thousands of entries, you will have to be technically perfect and conceptually strong. There is no luck involved. It’s pure quality that wins.

This year we saw quite a few bodies of work that can be described as mix-genre storytelling. Some of them were so tightly edited that we couldn’t take picture out. We could only show 100 pictures in the end. But some photographers made sure that all of their six images were going in. Well done! Again this tells me that if submitting series-based work, then the editing is vital. It can make or break.

Finally, I send out my whole-hearted congrats to all the finalists. You really deserve it.