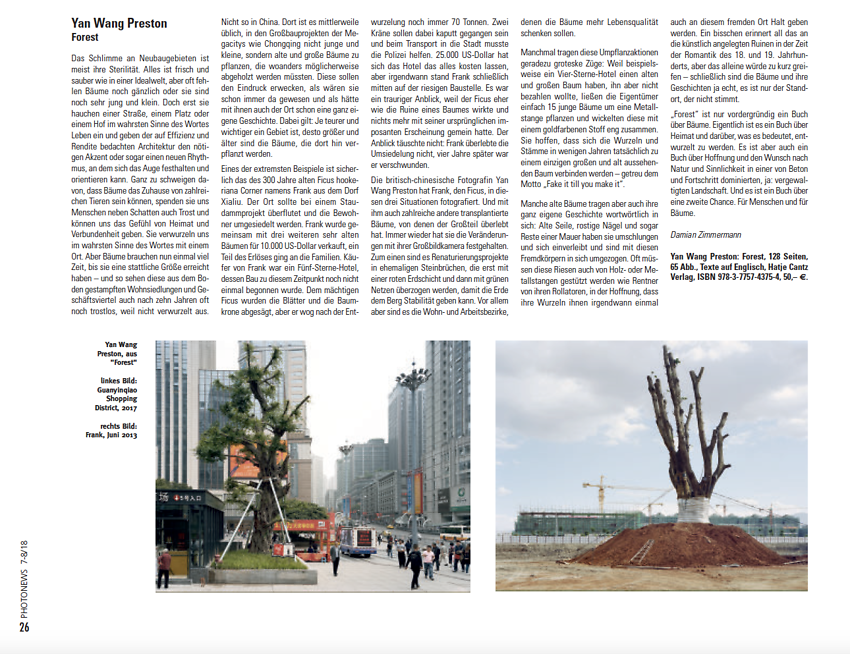 An in-depth review of my Forest book by Damian Zimmermann is published in the leading German magazine PHOTONEWS. Here is a translation of the text:

The bad thing about new housing estates is usually their sterility. Everything is fresh and clean as in an ideal world, but often trees are missing completely or they are still very young and small. But it is they who literally breathe life into a street, a square or a yard and give the architecture designed for efficiency and yield the necessary accent or even a new rhythm to which the eye can cling and orient itself. Not to mention that trees can be the home of many animals, they provide comfort and comfort to us humans in addition to shadows and can give us the feeling of home and closeness. They literally root us in one place. But trees need a lot of time until they reach a stately size - and even after ten years, these scattered housing estates and business districts often look bleak, because they are not rooted. Not so in China. There, it is now customary to plant not young and small, but old and large trees in the major construction projects of the megacities like Chongqing, which might otherwise have to be cut down elsewhere. These are supposed to give the impression that they have always been there and that the place already has its own history with them. The more expensive and important an area is, the bigger and older are the trees that are transplanted there. One of the most extreme examples is certainly that of the 300-year-old Ficus hookeriana Corner named Frank from the village of Xialiu. The town was to be flooded during a dam project and the inhabitants relocated. Frank was sold together with three other very old trees for $ 10,000, part of the proceeds went to the families. Buyer of Frank was a five-star hotel whose construction was not even started at this time. The mighty Ficus sawed off the leaves and the treetop, but after being uprooted it still weighed 70 tons. Two cranes were said to have broken and during transport to the city, the police had to help. The hotel has cost $ 25,000, but eventually Frank finally stood in the middle of the huge construction site.

It was a sad sight, because the ficus seemed more like the ruins of a tree and had nothing in common with its original imposing appearance. The sight did not deceive: Frank did not survive the resettlement, four years later he was gone. The British-Chinese photographer Yan Wang Preston photographed Frank, the Ficus, in these three situations. And with him also numerous other transplanted trees, most of which has survived. Again and again she has captured the changes with her big-screen camera. On the one hand, there are renaturation projects in former quarries, which are first covered with a red layer of earth and then with green nets, so that the earth can give stability to the mountain. But above all, it is the residential and working districts, to which the trees should give more quality of life. Sometimes these transplanting moves are grotesque: for example, because a four-star hotel has an old and tall tree, but did not want to pay for it, the owners simply had 15 young trees planted around a metal bar and wrapped it closely with a golden fabric. They hope that in a few years' time the roots and trunks will actually become one big and old-looking tree, true to the motto "Fake it till you make it".

But some old trees also carry theirs very own story literally in themselves: old ropes, rusty nails and even remains of a wall that they have embraced and incorporated. Often these giants also need to be supported as pensioners from their re-locators, hoping that their roots at some point also establish at this strange place. They remind us all of that the man-made ruins in time the romance of the 18th and 19th centuries.

"Forest" is only superficially a book over trees. Actually it's a book about home and what it means to be uprooted and to become. But it is also one book about hope and desire for Nature and sensuality in one of places where concrete and progress dominated. Yes: raped landscape. And it's a book about a second chance. For people and for trees.'