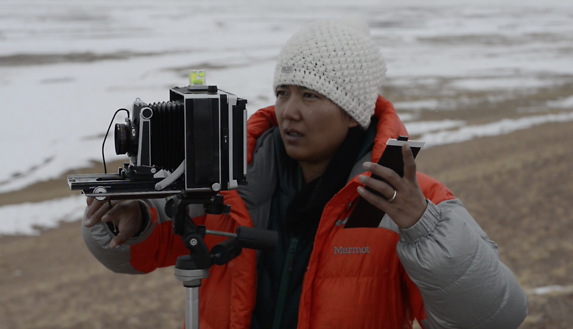 Yan Wang Preston is a visual artist with sustained interests in landscape representation, its relationship to national and personal identities, migration as well as the environment. With large-format photography as her primary media, her solo, collaborative and participatory projects employ still and moving image, sound, performance, installation and the artist book to explore complex ideas from multiple angles.

Wang Preston’s practice is characterised by long-term and rigorous research processes that are led by her committed embodiment within the landscape in order to gain first-hand, skin-to-skin like understanding. Her ambitious concepts are often highly demanding physically, intellectually and emotionally. For her first major project, Mother River (2010-2014), she photographed the entire 6,211km Yangtze River in China at precise 100m intervals on a large-format plate camera. Such monumental undertaking enabled her to provide a multi-layered, vernacular view of contemporary China while subverting the existing hierarchies within the Yangtze’s photographic representation established since 1842. Her second project, Forest (2010-2017), investigated the complexities, hopes and failures of constructed urban nature in China by following the adaptation journeys of transplanted old trees. Since 2020, Wang Preston has shifted her gaze from China to the UK, where she currently resides. ‘With Love. From an Invader.’ (2020-2021) saw her opening up her research by walking to and photographing the same rhododendron bush on a South Pennines moorland every other day for an entire year. The project was initiated by her question over the term ‘non-native and invasive species’, which is often used to describe introduced species such as the rhododendrons. The outcome of this research is an embodied understanding of the term ‘recombinant ecology’. It produced a four-panel visual-audio installation with a 38-minute soundtrack written by her collaborator Monty Adkins, presenting visual and sonic ‘data’ in defence of the rhododendron habitat.

Her work is in the collection of the National Trust, UK, Wuhan Art Museum, China, Syngenta AG, Swatch Art Peace Hotel and a large following of private collectors. Her UK print sales is represented by Messums London.

Wang Preston was born in Henan Province in China in 1976, to a family of medical doctors. She gained her BA in Clinical Medicine in Fudan University, Shanghai, in 1999 and was subsequently qualified as a practicing anesthetist. She emigrated to the UK in 2005 and changed her career to photography. In 2009 she gained a MA in Visual Arts at Bradford Collage, Leeds Beckett University. In 2018 she was awarded a PhD in Photography by the University of Plymouth. Alongside her artistic career, she lectures at the University of Huddersfield on BA, MA and PhD levels. She is an active supporter of photography, serving as a judge for the Royal Photographic Society’s International Photography Exhibition 161, Criteria of Merit Panel for Hundred+ Heroines and on the board of Redeye The Photography Network. She lives in West Yorkshire, UK, with her husband and daughter.